(Tara) Things are changing up a little around here.

A few weeks ago Meegan and I stepped on the scale after taking a long break from looking at the numbers. My clothes were feeling a little more snug. My snacking was a little more often. My “full” threshold being pushed a little farther and farther.

Meegan and I both have been trying to find comfort in foods to deal with some underlying issues related to her accident, my lack of work (come on Canadian Goverment!) and if you’ve never been to Halifax, let me just be the first to tell you they have some pretty amazing ice creams here…

So we agreed to step on the scale. There are some gains.  You can read about our personal feelings on the gains over at alifechangingjourney and redstar5 but the important thing is not focusing on the fact that a few numbers on a scale went up but that we have the power to bring those numbers down and that we can support each other in doing just that.

There haven’t been many posts here on TheHDD because Meegan has had a really good opportunity to join a new program called Lighten Up. It’s a 6 weeks online weight loss “retreat” program that not only focuses on food but all the aspects that comes with losing weight (emotional/physical/self-worth). The program comes with a meal plan and we’ve been following that now for a bit. In addition, I’m still keeping track of calories for both making sure I’m not mindlessly eating but also to make sure I’m eating enough on long run days (which is not easy I tell you).

But that doesn’t mean we don’t have recipes to post. We’ve got a stack of them and it’s about finding the time to sit down and get them out. Between our personal blogs, the marathon training schedule, being involved with Lighten Up and enjoying the beautiful Nova Scotia Summer there hasn’t been a lot of HDD time…

One of the changes to TheHDD you might see coming up is that we’re not 100% Paleo right now. The meal plans call for adding gluten free grains and dairy back into our daily eating. We still eat a mostly paleo foundation (lean meats, lots of veggies, as little processed foods as possible) but to see if this plan works for Meegan (and for me) we are following it as close as possible.

The recipes below for the Paleo Spaghetti and homemade sauce are one of our favorites. Lots of extra sauce is made in the recipe (especially if you are cooking for two) so remember to freeze it so when you want to make a quick Paleo Spaghetti dinner you’ll have all the fixins!

Cook the ground beef thoroughly in pan and drain. Keep separate until the final step of the sauce.

Have you ever roasted a pepper? It’s what’s going to bring the flavor out in the sauce so get ready to roast these bad boys. If you don’t know how to roast a pepper here’s a youtube video with a few suggestions.

Once my peppers are roasted I will throw them in a sealed container to loosen up the skin a little more for easier peeling.

Once cooled and peeled, chop into large pieces and set aside.

Now for the tomatoes! Prepare ice bath (large bowl of water with ice). In a medium sauce pan, bring water to a boil. Once boil is going gently place 3-4 tomatoes in sauce pan and let sit until you see them split (it’s gonna happen fast so keep an eye on them).

With tongs or slotted spoon remove tomatoes and place into ice bath. Don’t keep them in there too long because the skin will separate and if you leave it too long the tomato will become “soggy”. It will only take about 15 seconds for it too cool down enough for you to grab it and peel. 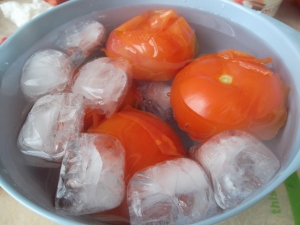 Repeat until all tomatoes are peeled. Then dice and put aside.

Now it’s time to put it all together! 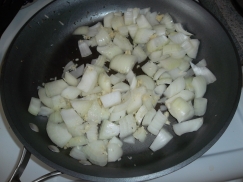 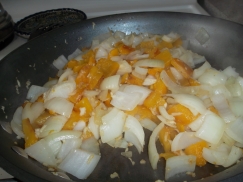 Allow to simmer while you get the “spaghetti” ready. 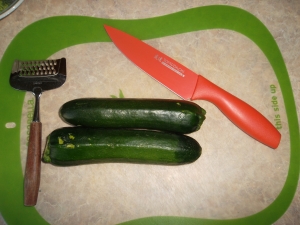 If you don’t have a either a grater or a peeler you can still make this but it will be a little time consuming. Cut the ends off of zucchini then slice length wise into thin strips and then slice again into spaghetti like strips…hopefully you have a grater or peeler. 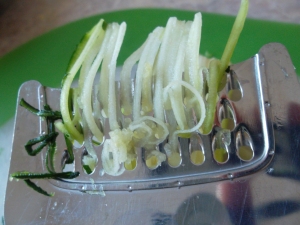 Heat up FoC in pan and then add zucchini. It will only take about 3 – 4 minutes to heat thoroughly, stirring gently.

Now put the two together and BAM!

This is a meal that we could eat following the Lighten Up plan and still follow the foundation of eating Paleo. Which in my book can only mean one thing: