Now before I get on with this post let me make sure we understand something very clear: Meegan > Pinterest. But the point here is when I can bring the two of them together to make something fun then all is right with the world!

I wanted to make something that while super indulgent wouldn’t leave a lot of opportunity to graze upon once the birthday festivities are over. As a substantial weight loss couple there are things we just don’t want to have lingering around the house. Sugary foods is one of them.

I came across this Mini Raspberry Swirl Cupcake a few weeks ago and knew right away this was going the treat for the goodness that is the Mimi Birthday!

The original recipe can be found over at Annie’s Eats. The only thing I changed about this recipe is the quantity of servings. The original made 32 so I cut everything in half and made 16…

For the raspberry swirl:

Preheat the oven to 325F

For this I pulled out my handy dandy little Magic Bullet because I didn’t think to buy the actual graham cracker crumbs…and not going to lie, I kind of wanted the extra crackers for when I’m craving something a little sweet and crunchy. 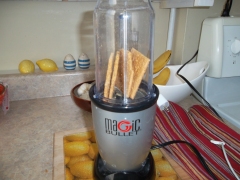 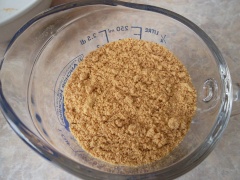 Mix the 3/4 cup of graham cracker crumbs with 2 tbsp sugar and 2 tbsp of melted butter. Mix well with fork until the all the crumbs are moist. Get out your muffin pan and liners (I picked something fun…okay actually it’s what Meegan had in the pantry and she’s kind of fancy in the baking department; yes I did feel a little under pressure to perform well in this cooking venture).

Next put 1 tbsp of the mixture into each cupcake liner and press to form the crust.

– Side note; as suggested in the original recipe I used a small drinking glass to press down the crust. If you do the same I noticed I needed to wipe off the bottom of the glass a few times so that the mixture wouldn’t stick to the bottom.

Once all the cupcake liners are filled place in oven for about 5 minutes. Remove and then let cook.

Again I used my magic bullet (there’s a dirty joke in here somewhere) for the puree. 3 oz of raspberries + 1 tbsp of sugar = Yummmmmm 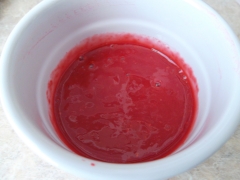 Use and electric mixer to beat cream cheese in a mixing bowl on medium/high speed until “fluffy”. Add 1 cup sugar and blend until a smooth consistency. Add pinch of salt and 1/2 tsp of vanilla extract and blend again. Beat one egg at a time, making sure to mix well in between each egg…

(you just try and resist licking the beaters)

Spoon 3 tbsp of cheesecake filling over the crust of each cupcake liner. Using a 1/2 tsp measuring spoon, “dot” the top of each with the raspberry puree then grab a toothpick (or wooden skewer) and get to swirling! 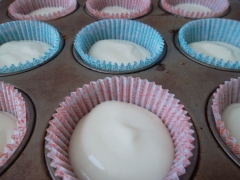 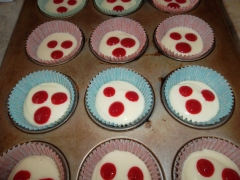 Bake for 22 minutes minutes until filling is set. Rotate the cupcake pan(s) halfway through. You’ll notice that the cheesecake will be puffy but that won’t last long once the baking is complete.

Remove from the oven and allow to cool to room temperature. Chill in refrigerator for about 4 hours before serving.